Rising abruptly out of the Western Victorian plains, the Grampians has long been a magnet for artists of all genres – including photography. 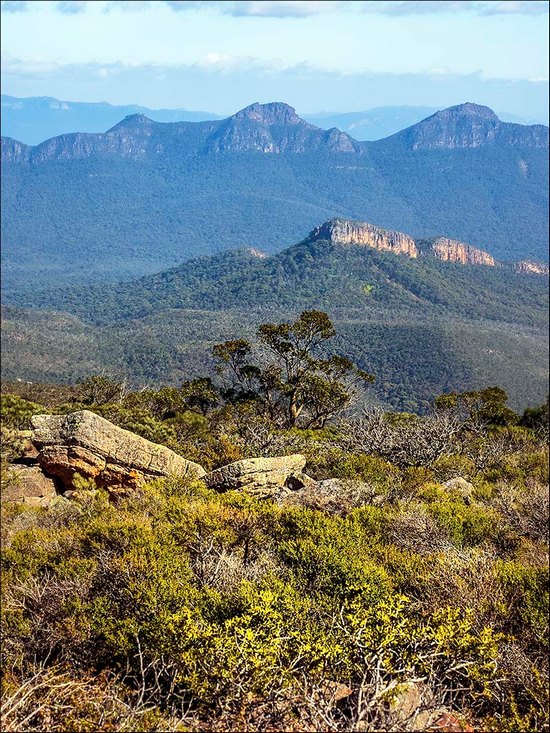 Looking towards the Serra Range from near the summit of Mount William which, at  1,167 metres is the highest point in the Grampians National Park.

The Grampians National Park (also known by its indigenous name: Gariwerd) was listed on the Australian National Heritage List on 15 December 2006 for its outstanding natural beauty and because it is one of the richest indigenous rock art sites in south-eastern Australia. Since the 1960s, it has also been a popular rock-climbing destination. So it offers plenty of potential for all kinds of photography.

The area consists of a series of roughly parallel sandstone ridges that have steep scarps along their eastern edges and gentle slopes to the west. It extends from Mt Zero and the associated scree slope and sandy outwash plain in the north to Mt Abrupt and Mt Sturgeon at Dunkeld in the south. On the eastern edge are the Mt William and Serra Ranges, while to the west are the Black Ranges. Two outliers, Mt Arapiles and Mitre Rock (west of Natimuk), and Mt Dundas (north-west of Cavendish) are normally included in this region.

Once described as the ‘garden of Victoria’, the region is home to more than a third of the state’s flora. The summits of the ranges are covered by low open-woodland/shrubland, while tall eucalypts are found in the valleys. The park contains more than 975 indigenous plant species, including more than 75 species of orchids, many of which are found nowhere else.

Kangaroos and emus can usually be seen around Halls Gap, particularly on the golf course and near the main camping areas. The park is also home to the rare spotted-tail quoll and long-nosed potoroo, both of which are nocturnal.

Cockatoos and other parrots are also frequently seen around settled areas and the park is one of the key stop-off points for the swift parrot on its annual migration between New South Wales and Tasmania. Bird song often accompanies walkers when they venture into the forested areas. (Dogs and other pets are not permitted within the park.) 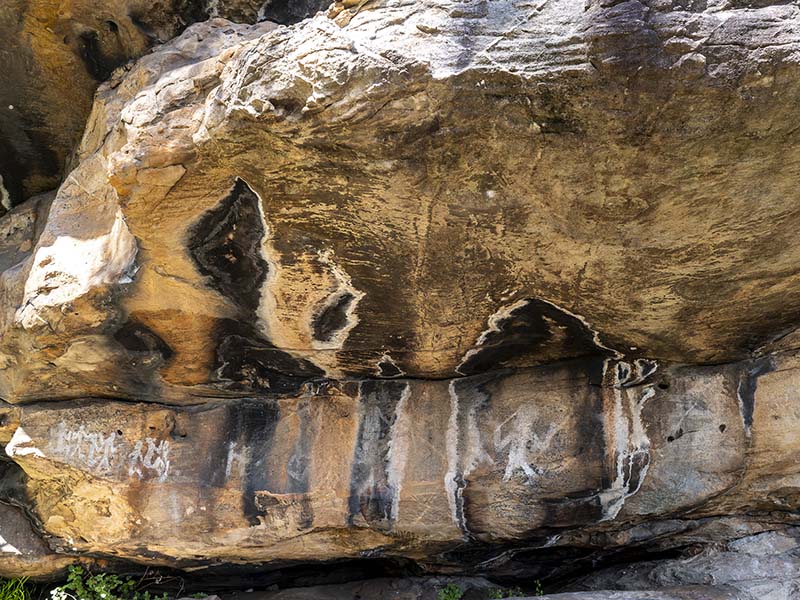 Rock art at the Ngamadjidj Shelter in the Wartook Valley. The paintings at this site are unusual because only white clay was used.

The area also has a rich Aboriginal heritage, which visitors can begin to discover by visiting the Brambuk National Park and Cultural Centre in Halls Gap. This facility is owned and managed by Jardwadjali and Djab Wurrung people from five Aboriginal communities with historic links to the area and is well worth visiting.

There’s no ‘best’ season for visiting the Grampians National Park, although spring and summer tend to be popular with most tourists. When you choose to visit will depend largely on the subjects you want to photograph and the climatic conditions that will suit you.

It’s probably best to avoid school holidays, if possible, as well as periods when the Grampian Arts groups are running workshops. Accommodation, which is usually plentiful, is often booked out well ahead of those periods.

The Indigenous people recognise six distinct weather periods which relate to environmental events such as plant flowering, fruiting and animal behavioural patterns. They are:

Kooyang, the season of eels and parched landscape, which occurs between January and March. This time is the hottest, driest time of the year. Days are longer and nights are warm. Streams can dry up completely during these months.

Gwangal Moronn, the season of honey bees, sunrises and flocking birds, runs from late March through to June. This is when the country starts to cool down after the summer heat.

Chinnup is the season of cockatoos, cool climate and early wildflowers. It occurs between June and late July, when morning frosts, bleak mists and freezing winds mark the coldest time of the year.

Larneuk, the season of nesting birds and changeable weather, occurs between July and August. A time of dramatic weather changes, it is also the wettest time of the year with rivers running high.

Petyan (late spring) is between August and November. During this period the days are warmer and the area is aglow with wildflowers and buzzing with wildlife. However, the weather can still be unsettled and windy.

Ballambar in early summer is the season of butterflies, warm weather and wetland plants. Extending from mid-November through to late January, it is a time when land dries and the weather stabilises.

The best time for wildflowers is between August and October. August sees the forests aglow with flowering wattles, while the pink heath (the floral emblem of the state of Victoria) creates splashes of colour in the shrubland and open forest from early September. 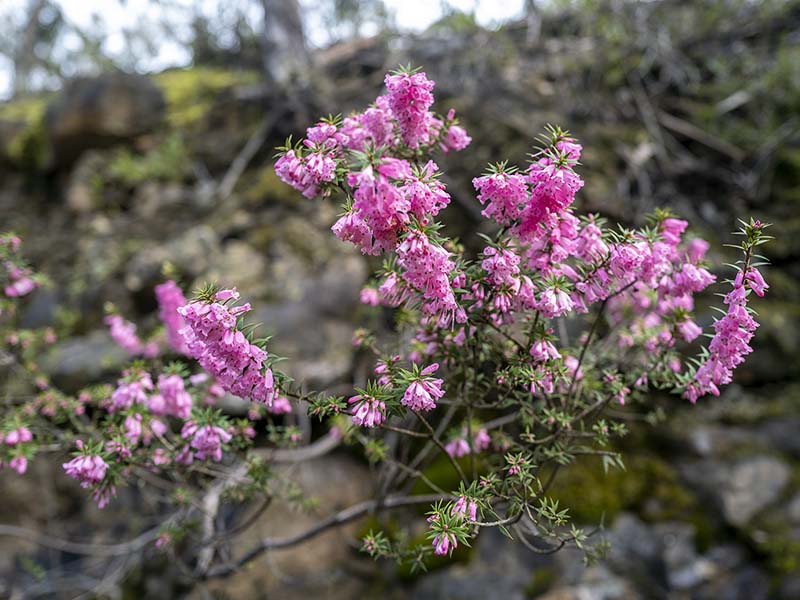 Common Heath (Epacris impressa), Victoria’s floral emblem, is one of many wildflowers that can be photographed in bloom in the area during spring.

The Grampians National Park is located between Stawell and Horsham on the Western Highway and Dunkeld on the Glenelg Highway, approximately 260 kilometres west of Melbourne and 460 kilometres east of Adelaide. Halls Gap (Budja Budja in the local indigenous language) is the largest service town in the area. It is located towards the eastern side of the park and offers accommodation to the many tourists who visit the area. Although you can get to Halls Gap by public transport, you really need your own vehicle to visit the main areas that are good for photography. 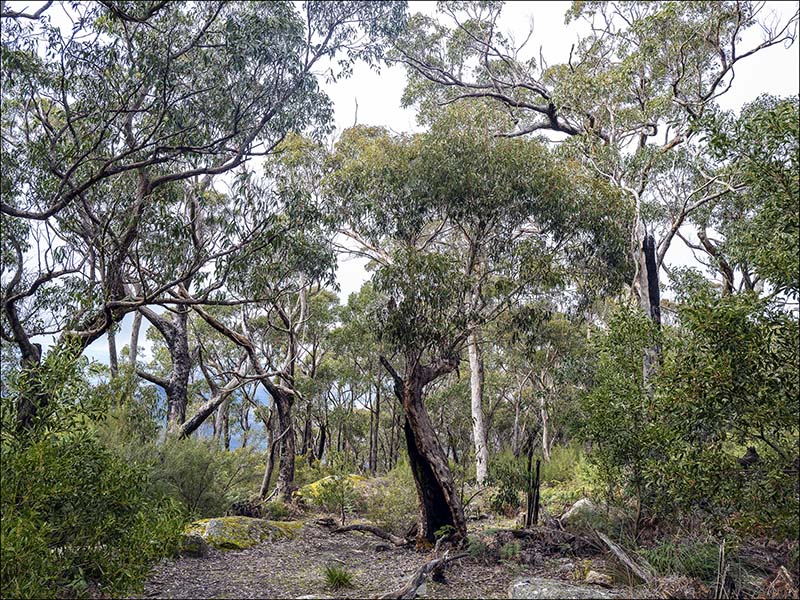 The open forest near Boroka Lookout, which overlooks Halls Gap, is best photographed in overcast weather, which makes it easier to capture the entire brightness range in the scene.

A network of mostly sealed roads and well-maintained walking tracks throughout the park allows visitors to reach the main scenic spots, which include cascading waterfalls, panoramic vistas and, in springtime, brilliant displays of wildflowers. Many tracks are wheelchair-accessible, although in some cases they end with a few steps leading to the actual lookout. 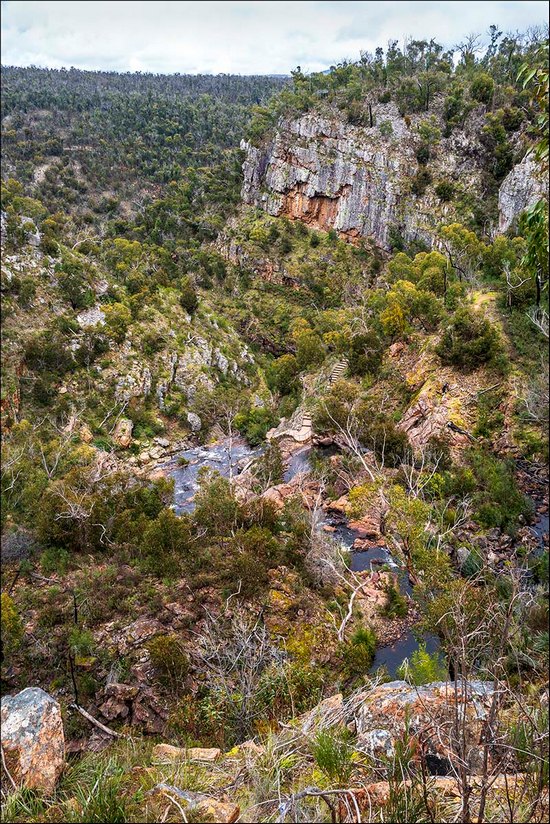 Looking down on MacKenzie Falls, one of the largest waterfalls in Victoria, from the Bluff Lookout, which is wheelchair-accessible. 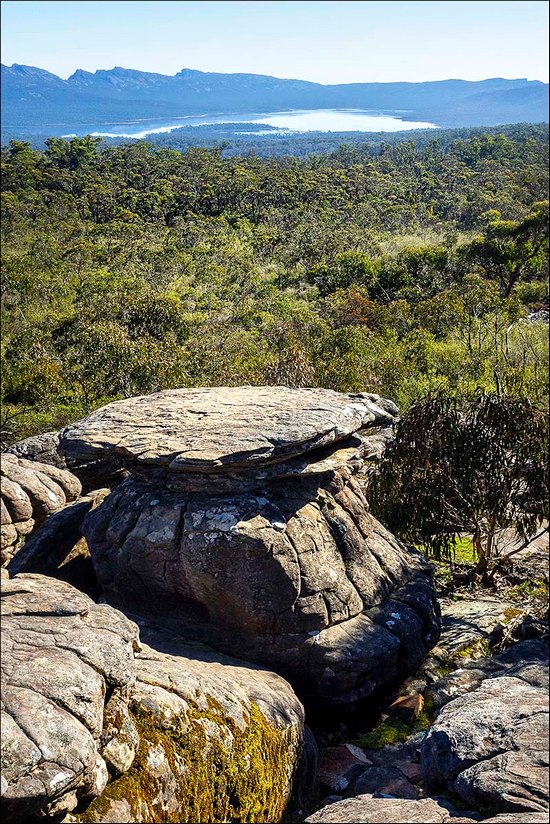 The view towards Lake Wartook from the track between the Reed Lookout and the Balconies.

If you’re after panoramic views, the best places to visit are Boroka Lookout, which overlooks Halls Gap as well as Reeds Lookout and The Balconies and the lookouts over Mackenzie Falls. A more challenging walk will take you to the summit of Mount William, the highest peak, which provides a 360 degrees view of the entire mountain range. 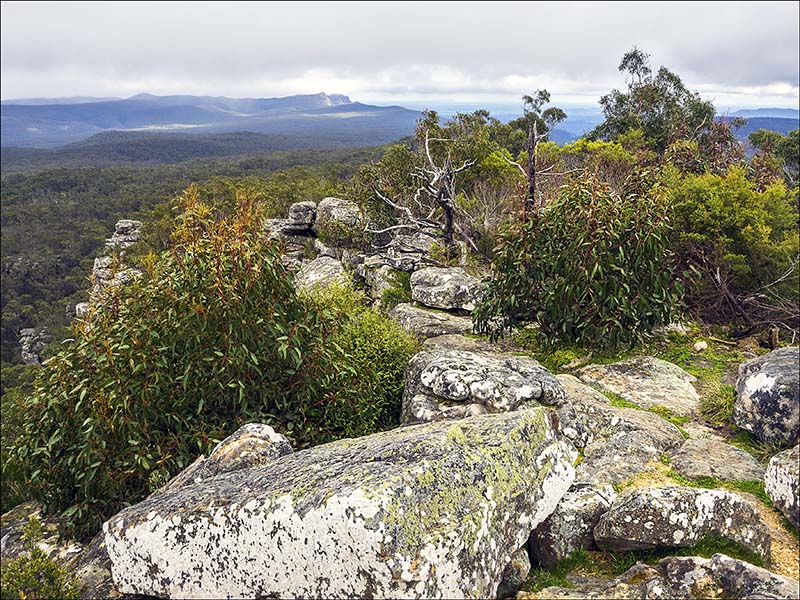 Looking northwest from the fire tower above Reeds Lookout towards Mount Difficult in the distance.

Another option is the Pinnacle walk and lookout, which can be reached from several starting points. The Sundial Car Park provides the easiest route, with a 2.1km climb that should take a little over two hours for the return trip.  Water crossings and rock-hopping are involved so sturdy shoes are essential. 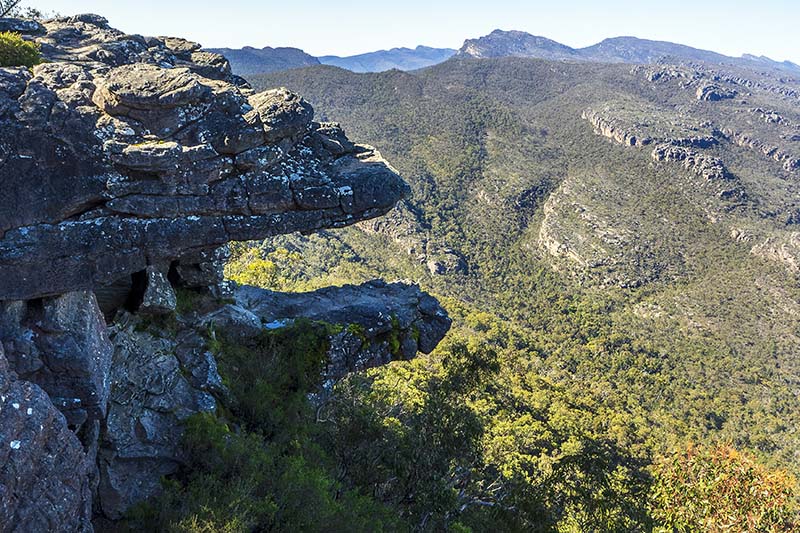 Formerly known as the ‘Jaws of Death’, this rock formation is located beside the Balconies lookout, which overlook the Victoria Valley.

For the less mobile, the drive between Halls Gap and Dunkeld can be taken as a circular route, returning via the picturesque Victoria Valley. Also worthwhile is a trip to Bunjil Shelter, which is widely regarded as one of the most significant cultural sites in south eastern Australia and is located off a major road near the town of Stawell. Art work under a rock ledge depicts Bunjil, the creator spirit, along with his two dingoes.

Two other sites in the north of the park, the Ngamadjidj Shelter which is only a short walk from the Mt Stapylton campground and Gulgurn Manja (which means ‘Hands of Young People’) near Hollow Mountain are also worth visiting and easy to get to. Note that these sites are protected by metal grilles, which make photographing them something of a challenge.

What gear to take

Light gear is advisable if you plan to go on the longer or more strenuous walks. Weather resistant cameras and lenses are highly desirable – and essential if you plan to be any distance from shelter because conditions can change unexpectedly.

Wide-angle lenses will be useful for photographing panoramic vistas and forests, while longer focal lengths will be needed if you want to home in on distant peaks or photograph any of the birds or animals. A general-purpose 24-105mm lens (35mm equivalent), should suffice for all but the latter.

Macro lenses will only be necessary if you want to take close-ups of the smaller flowers and insects but general-purpose zoom lenses should provide adequate close-up coverage for most of the flora. If you must take a tripod, opt for a compact lightweight model. Avoid flash, except in situations where fill-in light is essential.

Don’t be disappointed if the weather turns against you; many places, particularly waterfalls, look better when it’s overcast or even raining. Watch out for rainbows when the sky begins to clear.

Be aware of the potential for blown-out highlights on bright, cloudless days. Shadows can also block up in these conditions. Shooting raw files and exposing for a best fit in the histogram will give you the greatest chance of obtaining printable images. JPEG shooters could try their camera’s HDR settings (which aren’t applied to raw files).

Sunrises and sunsets can be worth striving for. Be prepared to arrive early and leave late to obtain the ‘best’ colours. Shooting raw files enables you to adjust the contrast, colour balance and saturation when files are converted into editable formats to make the scene appear more attractive when printed.