Canon has confirmed the anticipated EOS R3 is due for release in late November, combining the familiar design and features of the EOS-1 series with leading-edge digital technology. 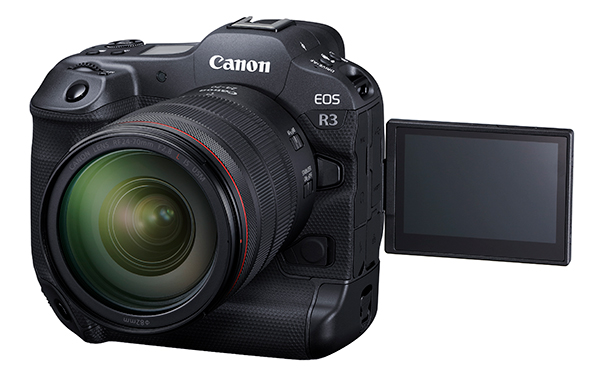 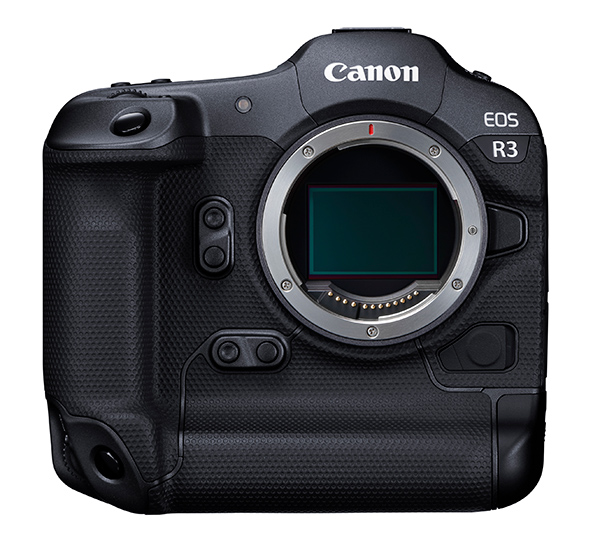 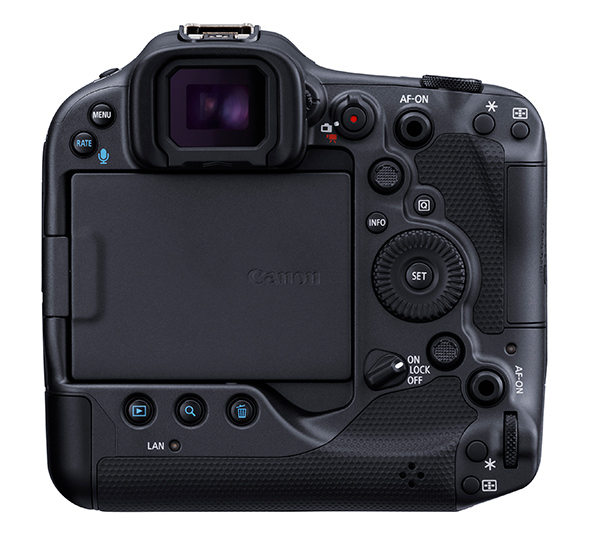 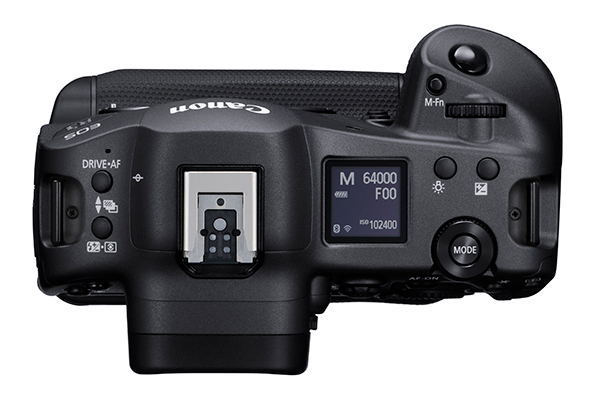 Front, back and top views of the EOS R3 with no lens fitted. (Source: Canon.)

The EOS R3 has a new lightweight, dust and water-resistant magnesium body (shown above), which is smaller and lighter  than that of the EOS-1D X Mark II (details in the table below). Its shutter is rated for 500,000 cycles and claims an average release lag time of only 20 milliseconds. The new Canon developed blackout-free, 5.76 million dot electronic viewfinder combines low lag with a refresh rate of up to 120 fps at full resolution. For traditionalists, a new OVF simulation View Assist simulates the tones and dynamic range of an optical ‘finder.  The touch screen LCD monitor has a resolution of 4.1million dots, enabling it to display greater detail, while its full articulation (vari-angle) adjustments offer greater shooting flexibility than previous EOS-1 models. Although it uses existing EOS-1 ergonomics and the same LP-E19 battery as the EOS-1D X Mark II and EOS-1D X Mark III, the EOS R3 adds new customisation options such as shutter sounds with volume control plus the ability to copy and save personalised settings to memory cards for greater compatibility with existing DSLRs to support existing professional workflows. 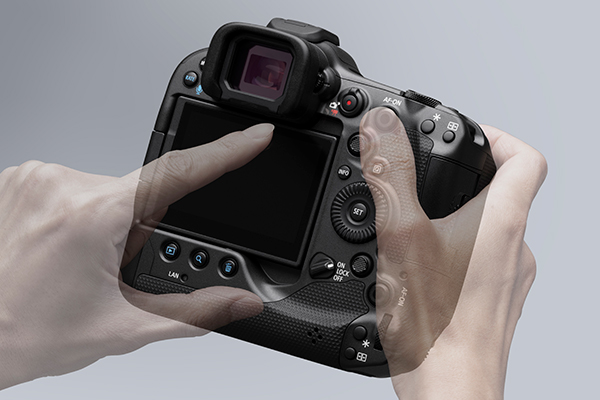 For sports and other action photographers, the electronic shutter supports continuous shooting at up to 30fps for all file formats, along with AE and AF tracking. Canon has also introduced Flicker detection and a High Frequency anti-flicker shooting mode to minimise unwanted banding or colour and exposure issues. The electronic shutter can be used with both Canon and third-party flashes, where it supports X-sync at up to 1/250 second in first-curtain sync mode. (The mechanical shutter has a range of 30 to 1/8000 second with flash sync at 1/200 second.)

The EOS R3’s high speed performance carries across to its AF system, which is powered by Dual Pixel CMOS AF II technology and can focus in light levels down to -7.5 EV. It features an improved Deep Learning algorithm that supports AF tracking with human and animal eye, body and face detection in all AF modes as well as head detection for humans in both stills and videos. A new vehicle tracking function allows motorsports photographers to track motorbikes, open cockpit Formula cars as well as GT and rally cars – with the ability to prioritise the vehicle or the driver’s helmet. A new Flexible Zone setting allows users to set the size and shape of the Zone AF area. Photographers can choose from three ways to select AF points: the quick smart controller, the precise multi controller and the instinctive Eye Control AF, a new function that shifts the focus point to where the photographer looks and provides a fast and intuitive way to follow developing action. With Eye input AF2 and Servo AF activated, the camera will focus on and track moving subjects at that location in the frame. When Face Detect + Tracking is engaged, the camera will follow moving subjects around the full active AF area.

Another key feature of the EOS R3 is 5-axis in-body-image-stabilisation (IBIS), which can combine with optical stabilisation in selected RF lenses to offer up to eight stops of shake correction. The system works for both stills and video recording and greatly expands opportunities for handheld shooting and steady movie production for photographers on the move. Digital IS, which is the only IS function in the EOS-1D X III DSLR camera and works by cropping the image frame, is also available in the R3 to allow for additional shake correction when needed.

Being well connected is crucial for today’s press and sports photographers and the EOS R3 provides both the facilities and speed that place it ahead of competitors. Professional connectivity options include built in Bluetooth V. 5.0 and 5 GHz Wi-Fi, along with a Gigabit Ethernet port to support a high speed wired connection. Using these interfaces, photographers can transmit images to clients via FTP, while existing EOS R5 and EOS-1D X Mark III users can share network settings between the three cameras. The R3 can also be controlled remotely from a mobile device via the Canon’s Camera Connect App or by using the Browser Remote function (currently provided in the EOS-1D X Mark III) via an Ethernet connection. Browser Remote also enables users and head offices to remotely exchange metadata, browse and download images.

Canon’s Mobile File Transfer (MFT) app can also be used to send images via a mobile device to an FTP/FTPS/SFTP server. Future enhancements of the app will include text conversion of voice memos, while the new Smartphone Link AD-P1 accessory, which will be available in 2022 for AU$139, allows users to mount their Android device on the R3’s Multi-Function Shoe Adapter for transmitting images directly via the new MFT app. The Canon Camera Connect app also enables the EOS R3 firmware to be updated via phone – a first for an EOS camera.

Movie recording is taken to a new level, enabling the EOS R3 to capture action in professional-standard video. The camera can record 6K 60p RAW footage with 50% more detail than 4K clips contain. The 6K CRM RAW files allow exposure and white balance to be corrected post capture and 4K footage can be downsampled from 6K at up to 60p, guaranteeing the highest possible quality. The R3 can also record 4K footage at 120p for superior 4K slow-motion recordings. Up to six hours of regular video or 1.5 hours at high 119.88/100p frame rates can be recorded at a time. To reduce file sizes and speed up workflows when speed is essential, CRM light is supported and while the camera offers a choice of All-I or IPB compression for MP4 footage it also supports the smaller IPB light option, allowing users to select from a range of bit rates to meet their needs and storage requirements.

Two card slots are provided, one for a UHS-II SD card and other for the ultra-high speed CFexpress card to make shooting 6K RAW video possible. The R3 supports simultaneous recording to both cards in MP4 format, providing a fail-safe back up of vital footage. Users can also choose between Canon’s renowned Canon LOG 3, which enables 10-bit internal recording to achieve a greater dynamic range, or 10bit HDR PQ which minimises the need for editing or grading footage in post-production. The EOS R3 also boasts a new Multi-Function Shoe, which is compatible with a variety of accessories including the Speedlite EL-1 and new accessories such as the up-coming camera-powered Directional Stereo Microphone10 DM-E1D (due for release in 2022 ay AU$579) which features a number of directional controls  and the TEAC Tascam CA-XLR2d-C XLR adapter which enables two-channel recording with professional XLR microphones.

Pricing details have just been announced for the Multi-Function Shoe Adapter AD-E1 and Speedlite Transmitter ST-E10, both of which will be on sale in late November at AU$79 and AU%249, respectively. The AD-E1 is likely to be similar to Tascam’s recently-announced CA-XLR2d-C audio adapter, which includes a built-in AD converter and enables direct digital audio transmission from the camera. The ST-E10 is largely self-explanatory and likely to be similar to the existing ST-E2, which is a lightweight wireless slave flash controller that includes focus assistance.

The EOS R3 will be available in Australia from late November 2021 with pricing TBC. (Rumour suggests the US MSRP is US$5999 for the basic camera body.) The table below shows the main differences between the EOS R3 and the EOS-1D X Mark III, based upon available specifications for each camera.