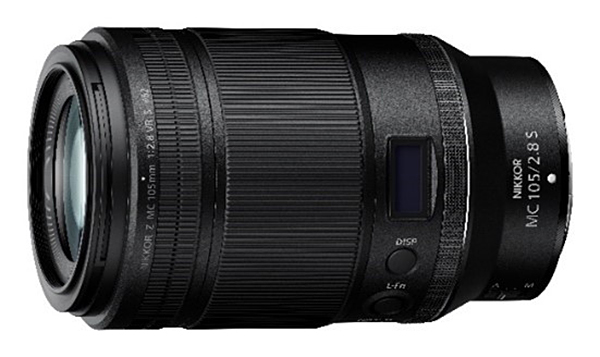 Equipped with 4.5 stops of VR stabilisation, which is compatible with the in-body stabilisation in full-frame Z series cameras, the Nikkor Z MC 105mm f/2.8 VR S is a high-quality S-line lens with a versatile mid-telephoto focal length and fast f/2.8 maximum aperture. Its optical design contains 16 elements in 11 groups and includes three ED (extra-low dispersion) elements, with a larger rear aspherical lens element to reduce field curvature across the focusing range. NANO Crystal and ARNEO Coatings have been applied to selected elements to minimise flare and ghosting effects, especially in backlit shots. The front element is fluorine coated to protect the lens against dust and grease and make it easy to keep clean.

A Multi-Focus STM (stepping motor) system provides consistently smooth, silent and accurate focus due to the customised autofocus algorithm, which accounts for small changes in distance that alter the effective aperture. The lens also includes a limiter switch to reduce the working range to a maximum of 50 centimetres for faster close focusing. Near-silent autofocusing and a minimum focus distance of 29 centimetres enable users to record high-quality still images and videos without disturbing small creatures in the field.

The Nikkor Z MC 105mm f/2.8 VR S weighs approximately 630 grams and is 140 mm long. It features a rubber seal around the lens mount to keep out dust and water droplets. 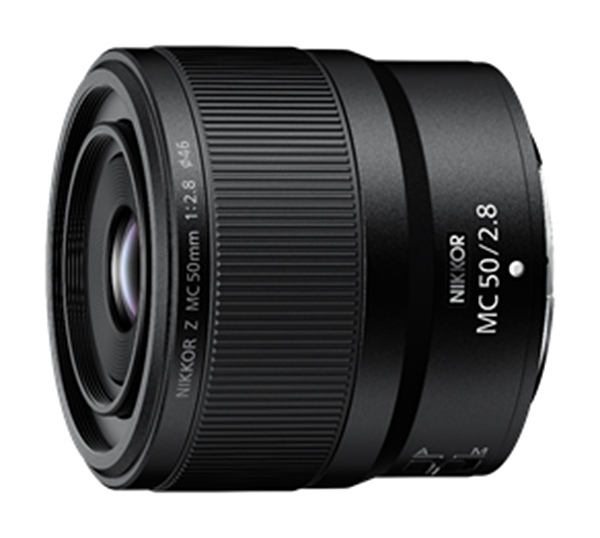 At only 260 grams and just 66 mm in length, the new NikkorZ MC 50mm f/2.8 lens is compact and lightweight and ideal for enthusiast and hobbyist photographers. Its optical design comprises ten elements in seven groups and include ED and an aspherical elements. With a focusing distance ranging from 5 to 16 centimetres, users will be able to get extremely close to subjects.  The fast f/2.8 maximum aperture allows this lens to be used in a wide range of lighting conditions and provides scope for depth of field control to isolate subjects from unattractive backgrounds. This lens also delivers excellent edge-to-edge sharpness with minimal distortion and boasts a fast, accurate, and almost silent AF system with minimal hunting and breathing. A focus limiter switch is included for greater speed and accuracy across a smaller distance range, while the lens barrel indicator shows the reproduction ratio and focus distance.

Compatibility with the ES-2 Film Digitising Set, lets users convert a full-frame Z-series camera into a high-resolution film digitiser for  35mm film negatives or slides. The lens boasts a fluorine coated front element to resist dirt and smudges, as well as a dust and drip resistant build for rugged reliability.

Both lenses will go on sale from late June. Click here for information about the new lenses and other Nikon products.

Nikon has also announced the release of NX Field, a remote shooting system for corporate use that is scheduled to be released on 17 June, 2021. The system will support those on the frontlines of news reporting, allowing users to link multiple Nikon digital SLR cameras, operate and adjust settings, and automatically upload images captured with the cameras to an FTP server. More details on enabling NX Field will be available here.

What Is An NFT? Non-Fungible Tokens Explained