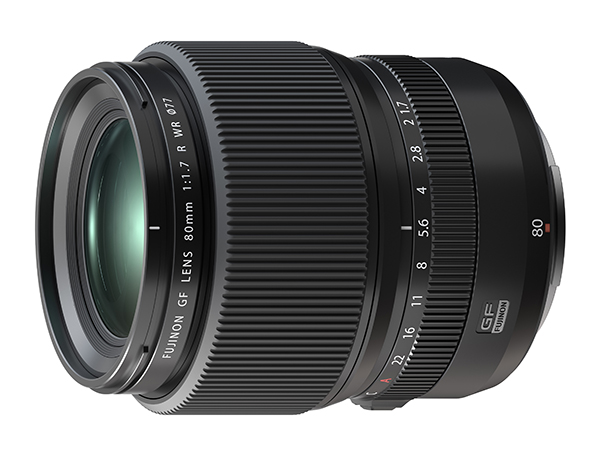 The new lens has a standard focal length of 80mm (equivalent to 63mm in 35mm format), while its fast f/1.7 maximum aperture makes it the fastest prime lens for the GFX System. The optical design of the new lens contains 12 elements in nine groups, including one aspherical element and two Super ED elements. The use of ultra high-precision glass moulding technology means both surfaces of the aspherical lens element can be manufactured within a tolerance of 1/100,000th of a millimeter. This is five times more accurate than regular moulding and reduces the onion-ring effect caused by slight defects in the lens surface on its out-of-focus regions. This lens is optimally balanced to control spherical aberration and deliver aesthetically pleasing bokeh.

Autofocusing is driven by a powerful DC motor that has enough torque to drive the focus group of six lens elements to deliver accurate and reliable autofocus, even when the lens is wide-open. Focusing is even more capable in low-light situations. The lens also supports the Face / Eye AF function, which uses an advanced focusing algorithm to accurately acquire focus on a subject’s face or eye even when they are moving within the frame.

Weather-resistant seals have been applied to the lens barrel at 10 locations on the lens to protect it against dust and water, while also providing it with the ability to operate at temperatures of down to -10°C. The front lens element is also coated with fluorine to repel dirt for an added layer of protection. The GF 80mm f/1.7 R WR lens is just 99.2 mm long and weighs only 795 grams, with a filter thread size of 77 mm. Its RRP is AU$3499 and it will be available at the end of February. Click here for more information.