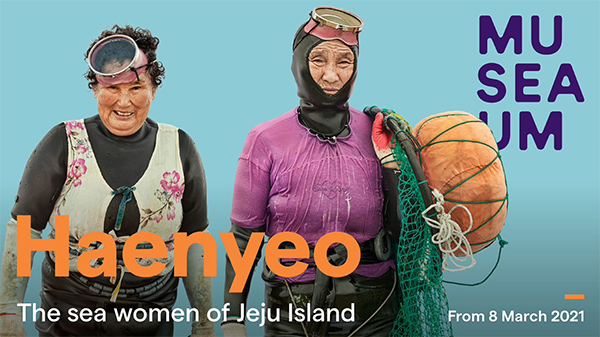 The exhibition features portraits taken by artist, Hyungsun Kim, to celebrate a community of women divers known as Haenyeo (sea women), who harvest the seas sustainably around Jeju Island, off the southern tip of South Korea. A collaboration between the Australian National Maritime Museum and the Korean Cultural Centre Australia with assistance from the Jeju Special Self-Governing Province, it has been supported by the Embassy of the Republic of Korea to commemorate the 60th anniversary of diplomatic relations between Australia and the Republic of Korea in 2021.

The sea women of Jeju are grandmothers, mothers and daughters mostly aged over 60, with some in their 80s. They free-dive to 20 metre depths for up to two minutes, for hours at a time to fill their net bags with sea cucumber, urchins, seaweed and abalone to feed their communities and to trade and sell, as they have for centuries. It is a dangerous practice. Divers train with their elders for years before they reach sanggun, senior status, to be allowed to dive in difficult conditions. The women pray to the Jamsugut, goddess of the sea, for safety and abundance.

The unique, sustainable cultural practice of the Jeju Haenyeo was inscribed on the UNESCO List of Intangible Cultural Heritage of Humanity in 2016. Their future is threatened however, as today there are only about 4,000 women registered as Haenyeo divers, out of a population of 600,000 on Jeju Island. This compares to 23,000 Haenyeo in the 1960s. The dramatic volcanic island is a popular tourist venue and many women choose other livelihoods or move to cities, while pollution and industrial scale fishing is degrading their seas and their catch.

Hyungsun Kim’s portraits show these women divers as more than just a symbol of an ancient practice; their incredible lives in the sea are writ in every line and surface as each woman confronts the photographer’s lens after coming in from a dive, in a makeshift-sheeted studio assembled on the shore. This free exhibition opened on 8 March and runs until 13 June.